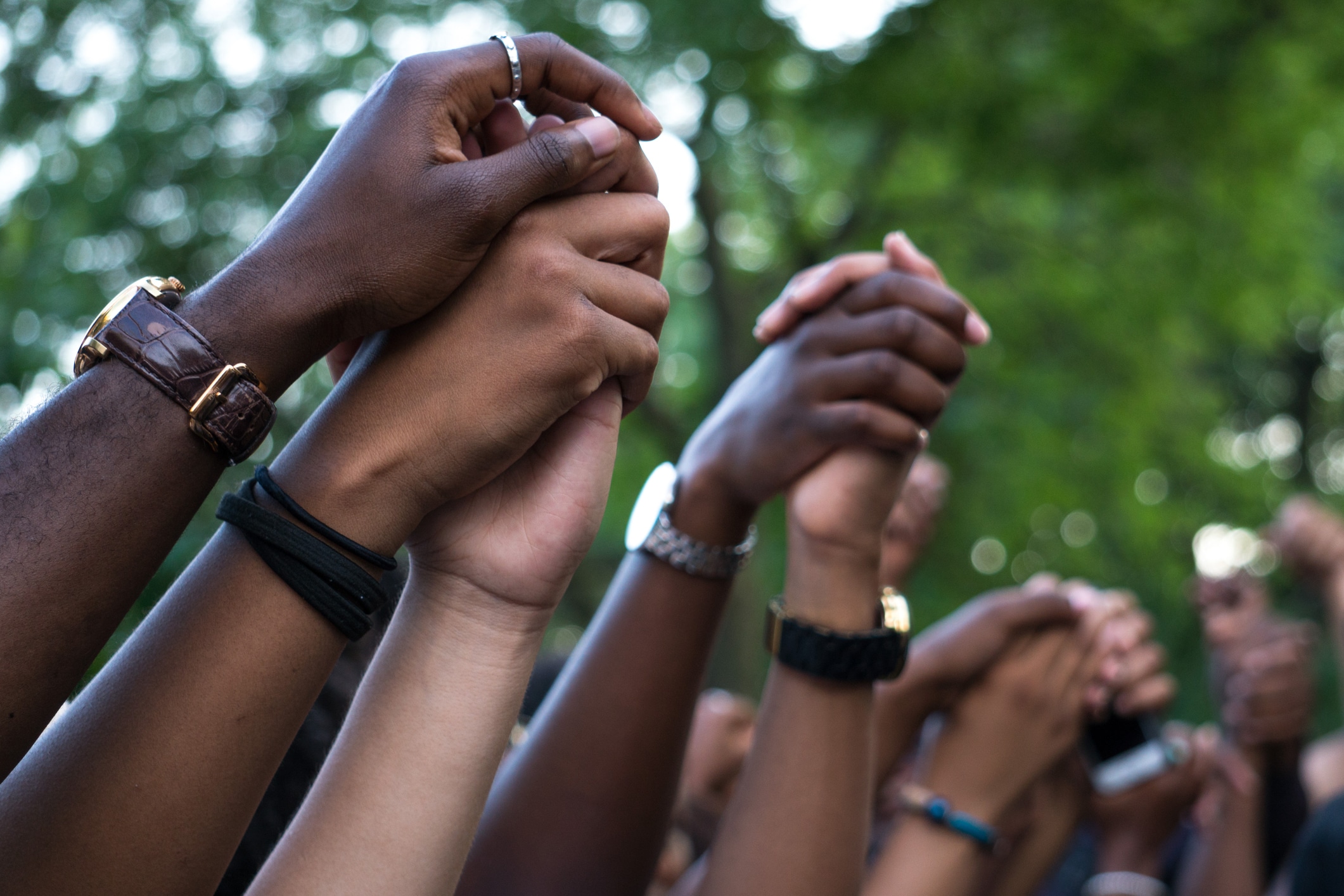 „No offense!“ About everyday racism and how it can be prevented.

„Where do you come from?”

„But where are you really coming from?”

This question is one of many examples for everyday racism. Some of our colleagues made such experiences as well – we want to show you how it’s done differently.

1. The many faces of everyday racism

Everyday racism usually isn’t based on bad intentions but rather expresses a lack of reflection. The author Tupoka Ogette explains that racism often “comes with a smile”. However, it is hurtful and gives the victims a feeling of being left out.

The problematic question: “Where are you from?”

The question about the origin, or its repetition at the latest, implies that the addressed person is foreign and not a part of the German society. The reason for that are certain characteristics like the color of the skin or a name, which doesn’t sound “German enough”. Too many people aren’t aware that a lot of PoC (People of Color) in Germany are actually German. (Note: People of Color is an international self-labeling of people who experience racism. They understand it as an alternative to foreign names that derive from the white majority society.)

Sandra of our HR-department knows this problem, too: As a child, she experienced everyday racism in the form of derogatory comments about the color of her skin or her afro hair. Although the daily discriminations have decreased over time, she is still scared of everyday racism – as much as of the question, where she is originally coming from and knowing that naming the German hometown won’t be enough for many people. Some of them even react annoyed, since the unexpected answer challenges their worldview.

The discourse about racism in Germany is still at the beginning, in my opinion. Many people don’t realize, how deeply racism is rooted in our society. We should talk about this more openly in order to break the taboo. Without a dialogue, there won’t be any change.

Everyday racism can also include messages with a supposedly good intention.

Like the sentence “You speak German quite well for being Turkish,” for example. Once the addressed person explains that he or she indeed is German, the doubts come up similar to when said question of origin is asked.

The initial problem is: With this supposed praise a non-affiliation is assumed – because who would praise someone for speaking his mothertongue fluently?

Also, jokes can be hurtful when they are about people of a certain ethnic group, which makes out the minority in this case. A famous example is Apu of the TV show “The Simpsons” – a show which racist tones were discussed and criticized quite late. The issue of being the only representative of a minority and being connected to these negative prejudices also exists for our Area Product Manager Shashi. He moved to the area of Detroit at the age of nine and was teased a lot by the other children there:

In America, when I was growing up there were no representations of South Asians in pop culture, except Apu in the Simpsons. This was terrible, especially since the community of immigrants around me was high end professionals: doctors, engineers, academics etc. Still, kids are mean and would often make fun of us by using Apu’s terrible “Indian” accent. That was everyday racism in my childhood.

However, the native Indian loves the city Detroit for its music, which is still on his and his families minds until today. As an adult, he made the experience that many people in Germany were surprised by his academic title, since it apparently didn’t match their image of a South-Asian man. He also gets stared at a lot while driving the subway with his wife, who comes from Münster. Every time they are visiting her relatives there, Shashi and her are having fun while playing with the expectations of the people:

Münsteraner have a particular style of clothes, which is influenced partly by the aristocracy around the area. I find them quite classically cool and wear them often. This is also surprising to people. Even before they hear me speak American English, I can tell they are a bit confused about how I know and own their uniforms; it can be quite hilarious, actually.

Charlene has been part of our customer service for five years now. For her it seems like she has experienced racism more often in the past than nowadays. However, she’s concerned that this may be because children are a much easier target than confident young women, as she describes herself today. Even though it’s not easy, the Afro-German reacts determined but still respectful in such situations – and explains the persons concerned why their behavior is inappropriate and racist. Not everyone shows themselves to be reasonable, however:

I was taking the train to go home one late afternoon, when I noticed an older man making racist jokes about black people, which I don’t want to get into detail here. After realizing that he was addressing me with these jokes, I confronted him and tried to make him aware of his racism. He continued making racist expressions, which is why I changed my seat. I would have hoped for the people around me to be more helpful in this situation, but they simply ignored everything that happened. Us victims don’t dramatize situations like these – everyday racism actually exists.

Everyday racism as a silent companion during freetime activities

Fabio is working for our Finance Department since 2017 and is our team lead for online-accounting. He lives in Cologne and originally comes from Gronau near Münster. He‘s German-Italian and has an international circle of friends. He therefor had direct and indirect experiences with everyday racism, for example at their soccer club or with (supposed) visits to clubs. At an open air concert, for which they needed to buy tickets in advance, some of his friends were rejected at the entrance – they supposedly weren’t matching “the style” of the event. Demands for explanations were ignored, but it was obvious that they looked too foreign for the organizers of the event. Fabios’ friends weren’t the only ones being denied entry because of this, which later on brought up a lot of critical voices against the organizer of the event. Football fan Fabio has tried several times to solve racist situations on the field verbally – but it was quite rare that his opponents gave in. That’s another reason why Fabio doesn’t see improvements on the current status quo:

It’s just sad that everyday racism is still present like this – whether it’s at sports, in the shape of police violence (USA) or in our day-to-day lives. It’s also unacceptable that we are able to vote for parties like the AFD in Germany. But other countries are doing it as well.

When double standards are applied

Lam Di is our working student in the team Controlling. Typical personal experiences with everyday racism for him are the question of his origin as well as prejudices when it comes to certain ethnic groups. To him, it’s normal that his friends, colleagues and managers have different backgrounds than him. And he likes teams which are diverse.

He also realized another aspect of everyday racism, which shows that double standards are still applied quite often:

When a person with foreign routes is making a mistake, this mistake is often applied to all people of the same ethnic group. That doesn’t happen to people belonging to the majority. I would wish that more people without a foreign background would be aware of their privilege!

All of the named aspects can only scratch on the surface of such a complex topic – however they are showing how widely spread everyday racism still is – and that it’s preventable in many cases. In the following, you’ll find useful tips and sources of information about this topic.

As a company with employees from 47 different nations – a rising trend – it’s very important to us, that everybody feels welcome here, no matter where they’re from. Thus, we feel very strongly about informing about everyday racism and are stepping up for diversity, also because ethnicity and origin are only a small part of the diversity dimensions. We are supporting the Charta der Vielfalt (Charta of diversity) and are celebrating the annual diversity month. But how can we actively do something against discriminations in the form of everyday racism?

Recommendations on how to be less racist:

– Be aware of your privilege of being a white person. It’s not about the color of your skin but rather your privileged standing in society. As a white person you are part of the majority, therefore are represented first in every matter and own privileges, which members of minorities don’t have.

– The next time you want to know more about the origin or birthplace of somebody, ask yourself if you would ask someone the same thing who looks a bit more “German”. Or to say it in Shashis words: „Be kind and assume that the person belongs exactly where they are.“

– In case you’re still asking that question, accept the answer – even if it’s not meeting your expectations.

– If you’re witnessing everyday racism, don’t just accept it, but offer your help to the victim.

– Question your prejudices and stereotypes which you have of certain ethnic groups or cultures.

– In case someone mentions that an expression you said was hurtful – take it serious and think about it. Such a reaction does not mean that the other person thinks of you as a bad person. You can take situations like these as a possible way to learn more about the hidden racism, of which you haven’t been aware before.

Background: Many people react hurt and defensive to such hints. Since they didn’t realize they were acting racist and don’t see themselves as racist people (“I’m not a racist!”), they are hurt quite often. In the worst case, victims get told to not act so sensitive about it and are expected to excuse themselves for their opinion. Unfortunately, also our colleagues have experienced such defense mechanisms. The suggestion that everyday racism is just an illusion can lead to the point that one starts to doubt his or her own perceptions, as Shashi explained to us.

– Inform yourself: There are various possibilites to get further information about everyday racism – for example workshops, podcasts, videos, articles and books.

Here’s a small selection of current articles about this topic:

– Alice Hasters: „Was weiße Menschen nicht über Rassismus hören wollen aber wissen sollten“ (German title). A prominent example for everyday racism marks the reception of the book itself: A famous German comedian called this book a „Big thing in the US“ – even though it has not been published there and the author is from Cologne.

– Vanessa Vu and Minh Thu Tran talk about many viet-german stories in their podcast „Rice and Shine“. The daughters of Vietnamese immigrants are looking into different stereotypes and show the fine line between appreciation and cultural appropriation.

Conclusion: Everyday racism in its various forms and manifestations is unfortunately more widespread than we assume. Although most people agree that the future is diverse, there is still a lot to do – for society, for businesses, and for individuals. Or, as Tupoka Ogette writes in her book Exit Racism, “Don’t give up. Fighting racism is a long struggle which has been going on for generations, not a brief uprising. So keep your expectations real, stay positive and keep your heart in the right place.” A big thanksnto our colleagues, without whom this article would not have been possible.